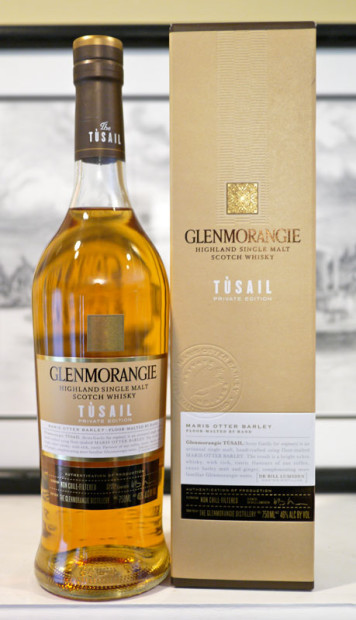 Tasting notes:
The Glenmorangie Tùsail features Maris Otter barley, a variety developed in Cambridge in the 1960s by Dr. G. D. H. Bell, who was known to friends as “G.D. Handsy,” even though few tended to stay his friends very long. Despite the fact that it was designed to produce exceptionally good cask-conditioned ales, many still had no idea why Dr. Bell was so “G.D. Handsy.”

Speaking of name origins, the word “otter” derives from the Old English word otor or oter, both of which themselves derive from a Proto-Indo-European word that ultimately also gave rise to the English word “water.” Did Glenmorangie have this in mind when they created the Tùsail? Is “Tùsail” Gaelic for “bad pun” directed at this attempt at creating this “Otter of Life”?

We may never know, so we’ll stop speculating and tell you what it’s like. It’s like rolling around in a vat of plummy, pruney clover honey dotted with willow catkins, only to have someone interrupt you to serve you a brown butter sautéed banana and a cinnamon kiwi coffee cake drenched in the richest children’s chewable aspirin reduction you’ve ever tasted. There’s exciting, even surprising sweetness, alongside ant farm soil, green apple chutney, and raisins from premature grapes that have been reconstituted from the tears of virgins (from a gamer convention). It finishes sappy but not resiny, and stays around like a house guest you really don’t want to leave. Then comes the fire, in the middle of which we got a moment of sour that shifted quickly to something else, not unlike a crab apple that shifts to a crab clutching a persimmon pit–with purpose. That is to say, Bill found it odd, while John and I were happy to split his share if he was going to be that way.

On the scale of otter species–
The Glenmorangie Tùsail is the sea otter–Eschewing the monetary unions of the European otters as well as the overly accommodative monetary policy of the North American river otter [Bill: which undercuts the Invisible Paw!], sea otters spend most of their time in the water and often use small rocks to open the shells of their prey, making them wonderfully self-sufficient in their off-shore havens.