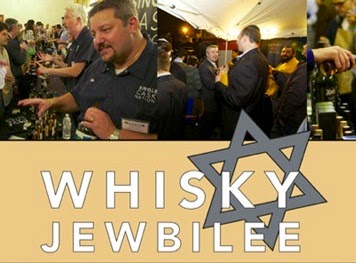 Let me begin by saying Shabbat Shalom everybody.  I say this because from here on I suspect that my goyish charm is going to overwhelm any attempts I might make to seem hip to the Tribe and all of its wonders.  Though I do feel a special connection to those who don’t depend upon the threat of Hell to motivate their morality.  That said, I was lucky enough to attend my first Whisky Jewbilee earlier this week in New York City.  For those of you unfamiliar with the Jewbilee, it’s sanctioned directly by Yahweh.  OK, that may or may not be accurate.  It is, however, definitely organized by the Jewish Whisky Company, the brains behind Single Cask Nation, the ever-widening society of whisky lovers with their own single cask bottlings.  You can find reviews of many of Single Cask Nation’s bottlings under the tag “Single Cask Nation” in the burgeoning Events section (found under Navigate the Index in the right-hand column). 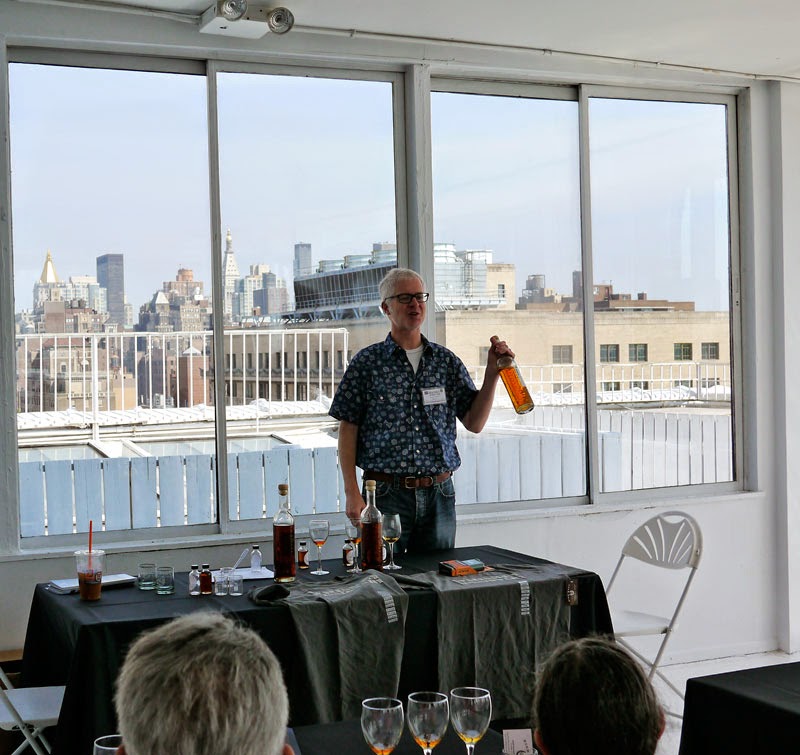 The Jewbilee was held at the swank penthouse Studio 450, and the view was outstanding.  The outdoor deck for smoking cigars was pretty choice, too.  But I’m jumping ahead.  The day’s festivities started with an afternoon Blending Class led by David Perkins of High West.  David walked us through the definition and uses of light whiskey and set us up to make our own blend from a lovely straight rye, an earthy straight Bourbon, and a creamy light whisky. 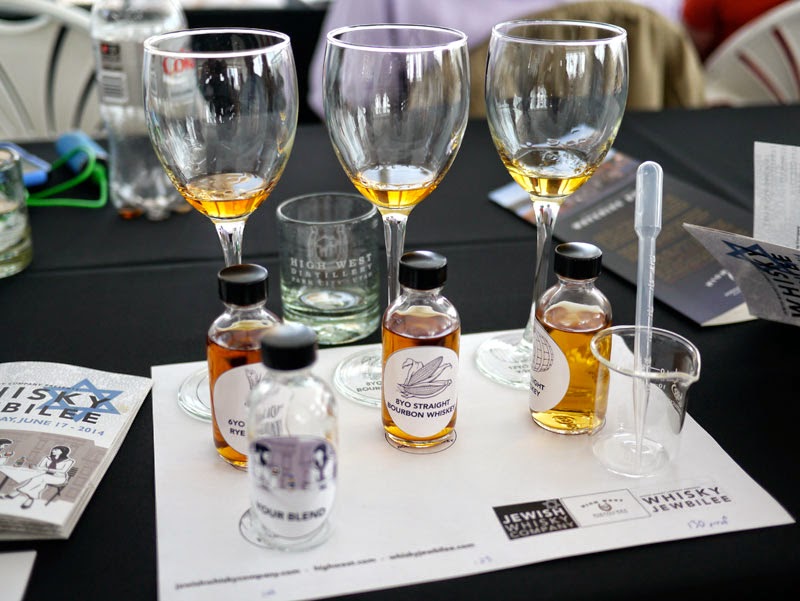 Then we got to play.  Actually, it was quite difficult to get the hang of blending–you realize that it’s for the patient, and it’s an art.  Oh, and straight rye will overpower your blend at about the same rate that a strongly peated whisky will.  And a nice bonus: participants got to take the handmade High West glassware home with them. 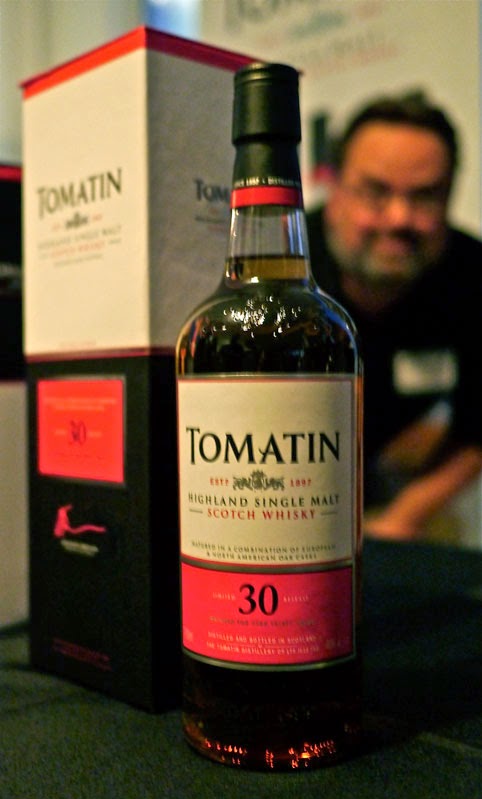 The main event came two hours later, and all of the New York whisky luminaries were in attendance.  There were two floors of tables, with food stations on each floor with very different food at each station–and all of it kosher, of course.  There was also space out on the deck, as I mentioned before, for cigar smoking, with a cigar purveyor (whom, regretfully, I did not get around to visiting) out there for good measure.  But the whisky was the star of the show, and there were more brands represented than I could get to over the course of the evening, I’m very sorry to report.  Standout drams for me included the Bowmore 25 year old, the Highland Park Freya (more to come on that one soon), Allison Patel’s singular Brenne, the Oban 18, the latest Laphroaig Cairdeas and PX cask, Gordon & MacPhail’s Scapa 10, and the glorious Tomatin 30 year old (thanks, Lindsey Tauer!).

One overall note: of all the whisky events I’ve ever attended, this was the most comfortable, the most friendly, and the easiest to navigate.  Nice people in a nice space will do that for you, but it was more than that.  Whatever the exact explanation, it’s subsumed under this more general truth:  Joshua Hatton, Jason Johnstone-Yellin, and Seth Klaskin (the fellas behind the Jewish Whisky Company) know what they’re doing. 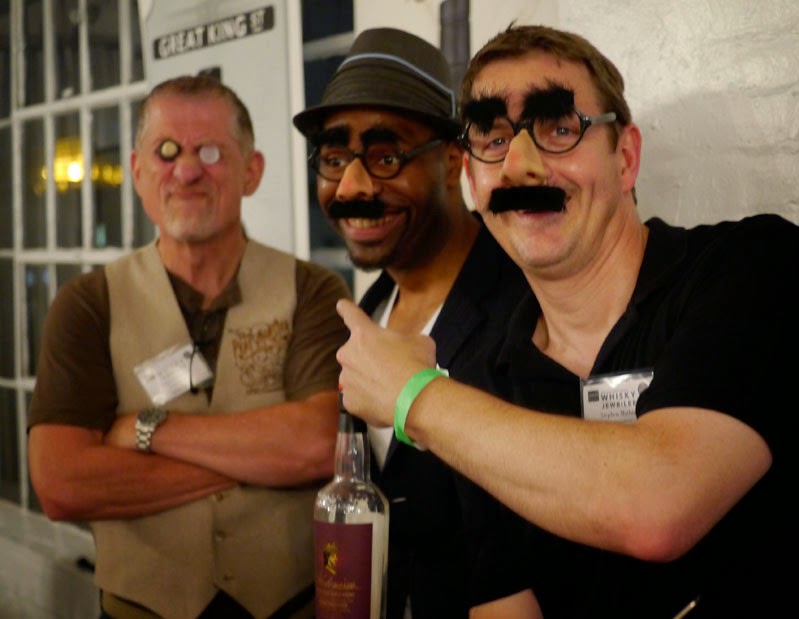 Finally, it was great to hang out a bit with the wonderful people of the whisky industry–and to subject them to being photographed in the Grouchos.  In this rogues’ gallery, the first shot (just above) features David Bailey from Compass Box with the beautiful Hedonism, along with David Laird and his colleague Jared from Balvenie with the instant classic Doublewood 17 and the old classic Doublewood 12. 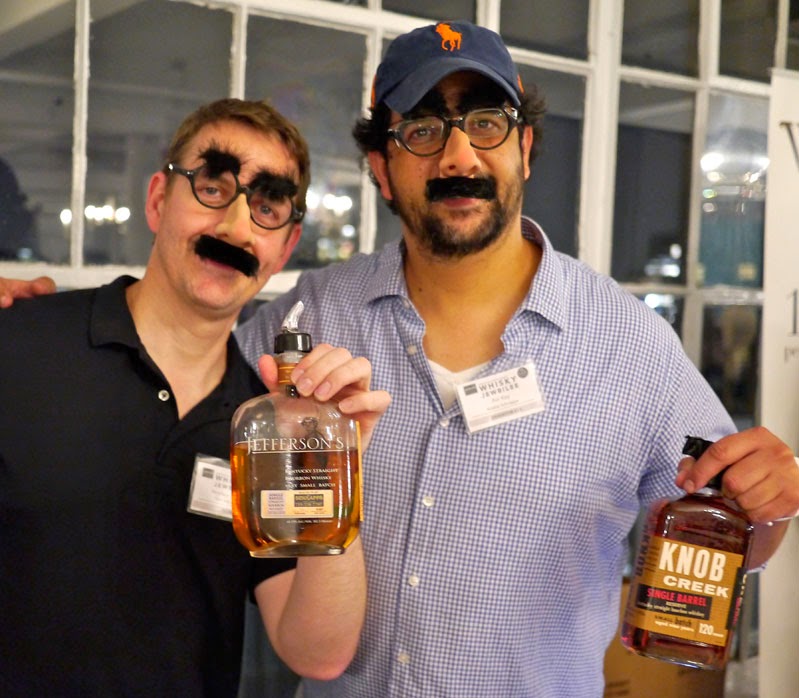 Then, the previously beGrouchoed Robin Robinson from Compass Box had to get into the act and made do given his lack of glasses.  Then came force of nature Avi Kay and the three single barrel Bourbons he hand-selected.  Finally, we come full circle back to David Perkins of High West, whom we’d pictured in an event review years ago now, only without the Grouchos.  Welcome to the club, David.  And same to you, unidentified but enthusiastic Jewbilee attendee.