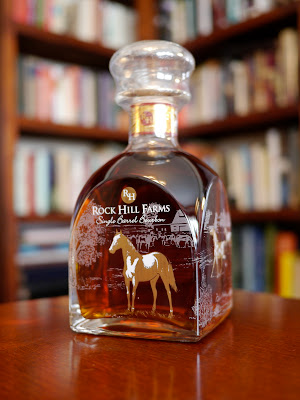 Tasting notes:
At shopping malls throughout the U.S., you can smell them before you see them.  I’m talking about fudge.  In particular, the stores that sell the fudge that they make right there in the store.  On some days you can hear them before you smell them.   That’s because there’s some underpaid but self-admiring high school chorus student singing popular songs to get the attention of the listless shoppers.  I think about this as I nose the hugely caramelly audacity that is the Rock Hill Farms Single Barrel Bourbon.  First a do-wop tune rises out of my glass; it’s Frankie Valli singing “Bourbon, Bour-ur-ur-bon, bour-ur, bon, bon, bon.  Bourbon baby.  Bour-ur-bon, won’t you come out tonight.”  But then the tune is mashed up with a Beach Boys tune, “Bour-, bour-, bour-; bour-, bour-, bourbon.”  Because what we have here is nothing if not a bourbon made in a caramel fudge factory that would inspire anyone to sing in public.  On the mouth, rye-rinsed crème brulée Lifesavers™, assorted bon bons, penuche, and a flared array of cannolis filled with a whiskey meringue.  It is so smooth the first sip nearly escapes my tongue.  But the second sip brings more of the mouth; chewy, caramelly goodness and the unsettled feeling that this is an all-too-drinkable whiskey that I quickly ignore.  The finish is canned pears with a magnolia syrup infusion and grated cheddar.  Along with an ashwood Shillelagh made in the Louisville Slugger Museum and Factory by a crazed former night watchman with one too many keys.  And rounded out by s’mores with a chunk of shopping mall fudge, artisanal marshmallows made by a hipster bakery collective in New Haven, and Carrs® water crackers.

Rating:
–On the scale of neologisms for noting the non-existence of an object (especially where one would expect such an object to be)–
The Rock Hill Farms Bourbon is the French word “sans” used as an adjective in English, as in the following sentence:  “Yo, the rating is sans.”  Yo, the need to say any more is sans, too.

Our thanks to Jobie Smith and Sazerac for the sample!