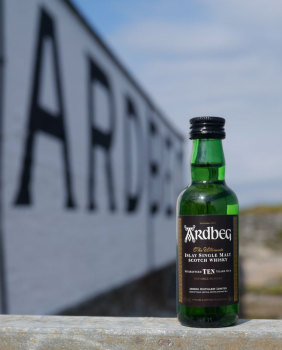 [A good long time ago now, we tried this dram amid other varied expressions from different distilleries during a trip to The Last Hurrah bar in Boston.  There, we did a brief review, and really gave this dram the short shrift, in part because its phenolic profile was so overwhelming after having sampled other, tamer drams.  So this full, proper review is long overdue.  And given that it’s our 3rd year Maltiversary today, we thought it fitting that we could make up for our half-assed earlier excuse for a review with a truly singular set of tasting notes, which we feel John has provided here, raising the bar for whisky tasting notes everywhere.]


Tasting notes:
The 25th anniversary of the disappearance of Angel Ignacio Illapa Valpariaso-Quispe gives the reviewer a chance for reminiscence.  And a bit of reverie, if I may be permitted.  The story of the bantamweight boxer from Bolivia is well known, not least because of his rather unfortunate moniker.  This is not, however, to say it wasn’t fitting.  For Angel “Lady Hands” Valpariaso-Quispe brought something distinctive to the squared circle.  His hands were uncommonly small.  As an amateur he had to put so much tape on them that he couldn’t feel his punches at all.  I can assure you, however, that his opponents felt them, all right.  His fig-sized fists found kidneys and ribs with devastating regularity.  And the sharp crack of his jab routinely opened up the sluices above the brows and cheeks of his opposition.  All of this is well known and hardly needs repeating here.  No, this is a moment for remembering his trainer, Rafael “Rafe” MacCutcheon, no known relation.  How this Scotsman ended up in rural Bolivia is disputed.  He used to tell stories of various adventures (usually involving a “magic forest”) or fanciful genealogies (Jorge Wilstermann was variously his father or an uncle), but the reviewer rather suspects it was owing to his dispute with his missionary parents over the validity of the maxim, “spare the rod, spoil the child.”  Rafe could look his mother in the eye at age six and was a notch taller than his father before his eighth birthday.  So it comes as no surprise that the parents couldn’t discipline this truculent titan, and so left him behind when they continued to Argentina.  Neither is it surprising that he would find his own success in the ring.  Of course, it’s his later impact on the townspeople of Yapacaní and above all on Lady Hands that we are here to remember.  And I begin with the true story behind a pivotal point in the pugilist’s career.  For it was Rafe who found the way to toughen up Lady Hands’ knuckles so that the tape wouldn’t cause them to bleed during the late rounds of his matches.  His method may have been inspired by Moises Alou, but in its munificence it far surpasses it.  You see, he poured out a healthy measure of Ardbeg 10 onto his own bear-sized hands and rubbed them into the tiny raised bumps from which Lady Hand’s delicate digits extended so tentatively, like the pearlescent tentacles of a skittish sea anemone.  No one in Yapacaní knew what Rafe kept in that curious green bottle in his bag.  Some said that the smell of this salve was that of a merino wool sweater worn by a lizard in a rainstorm.  Others were convinced that it was the breath of a Tusken Raider (morning breath, they insisted).  Another camp formed the view that it was a smell of two soups served on one tray: a lamb stew with herb sachet, without the lamb, and a very pleasant bouillabaisse centered on the head of a prize tuna.  Finally—and I mention this more in the spirit of comprehensiveness than endorsement—a distinctly minority position was that the hand salve smelled of a Wiccan poultice for treating shingles.
I myself can report on the taste, for my curiosity got the better of me on the night of the split decision with Aucapoma Apumayta Arancaya-Goldberg.  Tic Tacs®, mint jelly beans, Colman’s mustard, and an invisible tea steeped by a young girl in a princess outfit and offered in an exaggerated pantomime of generosity to her teddy bear.  My own later travels would trigger the memory of what I didn’t know then was peat.  A very well-rounded peat of the mechanically extruded sort, not the hand-cut sort.  There was also nothing jagged at all, in spite of Angel’s wincing when Rafe’s glistening mitts enveloped his pixie hands.  Yes, I rather think now that the taste was what you’d expect from an anise malting floor with lemons and jelly beans strewn about.  The finish was the postprandial cigarette smoke condensed on the windshield of a 1972 Jensen Interceptor with a stubborn fuel leak and balky transmission.  Like the memory of that encounter, the finish doesn’t change, it’s a veritable idée fixe, the way that some believe that Mt. Fuji does not pass through seasonal transformations, but rather sits atop the axis on which the world turns, like a Hello Kitty pencil eraser.  The Ardbeg 10 has precisely that kind of fidelity and perseverance in its finish.  It is a lodestone, a benchmark, or a garden spike sprinkler, if we’re to take account of the viewpoint of a mole.  Yes, and yes.  What I now know to be the Ardbeg 10, and not what Rafe called the “Special Potion” from the “Magical Cabbage,” is all of this and more.  I am not sure that it can save boxing careers.  But in its own small way, I suppose that it saved my life.

Rating:
–On the scale of evidence in the investigation of the disappearance of Angel Ignacio Illapa Valpariaso-Quispe–
The Ardbeg 10 is e. e. cummings’ poem,“somewhere I have never travelled, gladly beyond”— Found amid the usual post-fight detritus in Lady Hands’ training room, most of which is a knee-deep whirl of discarded tape nearly a tenth of a mile long, was this poem torn carefully from an anthology.  It was the last line of the poem that moved even the most seasoned investigators to tears: “nobody, not even the rain, has such small hands.”

–Our thanks to Ardbeg and Christy for the sample!