Stephen:  This past Thursday, The Malt Impostor co-conspirator triumvirate was fortunate enough to be able to attend the Single Malt & Scotch Whisky Extravaganza at the Taj Hotel in Boston.  It was an all-around extraordinary experience, one which is perhaps best captured by one particular moment in the evening that occurred well after the Extravaganza had concluded:  As we strolled leisurely along the streets of Boston in our tuxedos, smoking the cigars we’d scored in the Extravaganza, and fancying ourselves as members of the Rat Pack as we made our way back to our hotel, a group of college kids passed us, and one of them said to the others, “That looks like the start of ‘The Hangover’.”  Of course, our experience that evening was not nearly so raunchy, destructive, illegal, or memory-defying as the early (actual) chronology of the action in that film, but it was no less pleasurable and no less awe-inspiring in retrospect (and in real time).  Still, perhaps we were more wolf pack than rat pack…
The event was well-attended, if not a little crowded, but Gabby Shayne and the rest of the Scotch Malt Whisky Society crew moved people through the registration process very efficiently.  The variety of whiskies for tasting was substantial, and though each of us could easily identify a brand not represented, there were more expressions available than we had time to try.  Now, it’s possible we could have had time to try more whiskies had we not taken the time to eat, but it would have been just plain stupid of us (and of anyone) to have skipped out on the excellent buffet.  Highlights on the whisky tasting front (for me, anyway) included the porcelain-jug-housed-top-of-the-line Usquaebach, the 21 year-old Glenlivet, the peated 17 year-old Balvenie, the Hibiki, the Bowmore 15, the Ardbeg Airigh Nam Biest, the Scapa, the Glenmorangie 18 Year Old Extremely Rare, and, of course, the Highland Park 30 (though I must say that it was disturbing how tired the HP pourer was when I encountered her:  it was close to the end of the Extravaganza when I did, which makes me think perhaps her condition was attributable to the decision to offer the HP 30 in the first place, as it’s too much to ask one person to handle all of the requests that are sure to come with that particular gem on offer). 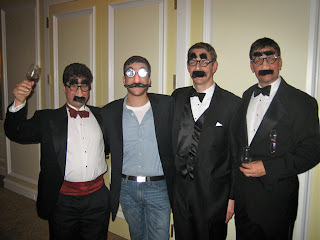 As whisky blog geeks, however, one of the best aspects of the night was getting a chance to meet Jewish Single Malt Whisky Society founder and blogger Joshua “Bright Eyes” Hatton (see pic, right) and to have a drink with him in the bar after the event.  In Joshua, we found a kindred spirit—he’s such a kindred spirit, in fact, that we’re thinking of bringing him in to do a guest post here!
Overall, it was, again, an extraordinary experience, and our thanks and deepest appreciation go out to Gabby Shayne and the Society for being such gracious hosts and for putting on such a wonderful event.

John:   The event was incredible; the selection of whiskies staggering.  Take the ages of all the whiskies I tried. Add them. Then subtract them from 2010. Now you’re in the late Minoan period. And they don’t know anything about distilling. But you’re still enjoying the finish from the Ardbeg Biest, so you’re not complaining.
It was great to see so many old friends and make new ones.  Oh, and there were lots of nice people.

How about “Colin,” the pseudonymous Russian mafioso trying to get us to the Liberty Hotel, where he and a bunch of strongarm vets from the Chechnyan (sp?) war would have found ways to separate us from our credit cards?  No?  We shouldn’t mention him?

Bill:  As is so often the case when my colleagues here at the Malt Impostor take the high road, I find that other paths sing a siren song, irresistable to my senses. Yes, though it be bramble-choked, mud- and scum-blotched, and might wind up, down, all around through sudden chill mists and equally sudden tropic humidity: I must add my own review.
Stephen, our inestimable Meister of Webs, might decontextualize some sentences from this paragraph which sum up some aspects of the evening for me. It’s been a long time since I went to bed with the room spinning around me, but it’s been significantly longer since I woke up with the room still spinning. Now I can point to 22 October 2010 as the latest in a series of nights/morns that stand as mileposts in one’s drinking life: Pete Hamill, Kingsley Amis, and Ernest Hemingway:  I salute you, brothers. To this tale, I add only that as I drove home from work on Friday, pale, trembling, weak, vitiated, and worried that if I got pulled over, my blood alcohol percent would still be over the limit.
As for my review proper, I’d also like to begin at the end, as Stephen did, but touch on a different aspect. He wrote of our long sashay down Newbury Street, dressed to the nines in tuxes, three sheets to the wind, three Monte Cristo cigars burning up the night, and one destination in mind. What he omitted was the following fact that continues to disturb me:  I cashed out our check at the Taj Hotel’s bar at 11:15. Allegedly we left the Taj by, say, 11:30, maybe a bit later. Our hotel–c’mon, you don’t think the Impostors could stay at the Taj, do you?–was a mere 2.4 miles away by foot. We were moving at a brisk clip, and I ground my cigar butt out on the sidewalk in front of our hotel. The time? 1:30 in the morning! Despite what John and Stephen might claim, we did not get lost:  I took the most scenic route, but still a direct one. What happened to that extra hour?! If I were by myself, it’d be easy to point to simple blackout, the fact that I was lost, a dalliance with a streetwalker, or anything. But there were three of us, the time worked out the same, and we didn’t all dally with streetwalkers (did we?). The most logical explanation I have is that we were abducted by fastidious and prudent aliens, who after their quick medical exam of three specimens of homo whiskyium drunkus, they coolly and thoughtfully wiped our memories, relit our cigars, and put us back on Earth. That’s all I got.  [John:  Bill got us so lost that we despaired of finding a cop, a taxi, or even a streetwalker.] 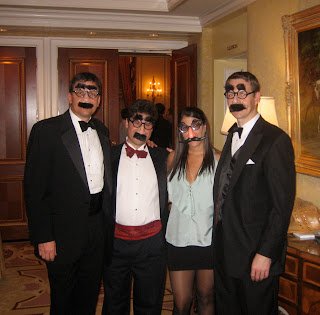 Anyways, regarding the event, Gabby was warm and welcoming, a remarkable hostess for the show, and a delight altogether. Once inside: Kid in a candy shop? No, because I was able to have all that I could have. Bull in a china shop? No, because I may have been blundering and bellowing, but I broke nothing, and the brand ambassadors were gracious, informative, and a dab hand at quick yet generous pours. Although I longed to act like the many professionals clustering the tables, and after a swish and a micro-sip, dump my undrunk portions into the spittoons  [Stephen:  Spittoons? Spit buckets.], I found that inevitably the expression turned out to be so expressive that it would have been a veritable sacrilege to waste any of it. So, I propose a new phrase: Sots on Scotch, which perfectly captures my rollicking, ping-ponging, chaotic billiard ball path through the various rooms and tables (and under the tables) of the night. The food was excellent, by the way, and I feel conflicted the way I imagine the Duggars must when they ponder a favorite child.  It wasn’t Sophie’s Choice, with only two to pick between; there were so many different scotches that were so outstanding…my highlights, if I may, in no particular order, were the Usquaebach Flagon Grand Whisky, the Glenmorangie Quinta Ruban, the Glenlivet 21, the Laphroaig 25, the Highland Park 30 (did they actually pour that for us, guys?), the Yamazaki 18, the Hibiki 12, the Scapa, and the Classic Cask Rare 35. A joker in the deck, but I must be true to my drinking origins, was the de Fussigny XO Cognac.
Besides Gabby, the other people who stood out were Joshua Hatton, the Jewish Singles Matchmaking Socializer [Stephen:  Sheesh. The Jewish Single Malt Whisky Society.]  Noah from Usquaebach, the gentleman from Suntory, Jerry Zimmerman from the Classic Cask, the kilted and sporran-wearing ambassador from Glenlivet, the kind and lovely young woman pouring the Aberfeldy, the lovely young women pouring the Scapa, and Mr. Silvestri who was repping, among other delights, the de Fussigny XO.
A magnificent evening, an epic evening, and a memorable evening (except for the missing hour).